Max Martini, You Made Me Cry

If you follow the blog Instagram, then you know that Saturday night mom and I sat down to finally watch Max Martini’s new film, Sgt. Will Gardner. I’ve had the upmost pleasure of following Max’s career for a while now. With this new movie, he has definitely brought up a rough topic that typically isn’t discussed in the every day circles: Veteran Homelessness. So before we hop in on the review of a heartbreaking movie that I absolutely fell in love with, let’s talk about homelessness among veterans.

There is no single answer as to why there are so many of our veterans live on the streets, in shelters, and so on here in the United States. To me, this is truly where our tax dollars should be focused as it is estimated that around 400,000 – as there is no exact number found by reports performed by the DoD – veterans are homeless. As there is no one true answer as to why so many veterans are homeless, it is thought that it is one of or a mixture of an inability to assimilate back into every day life, traumatic brain injuries (TBI – what Max’s character in the film suffers from), PTSD, and so on.

In a stark contrast, the number of veteran suicides a day still remain averaged at around 20 a day. Roughly that summarizes down to one every 65 minutes. For people who fight for our freedoms, this saddens me. There are many foundations created to help those that have served our country. But there is one that is near and dear to me and is supported by the production company that the film was made through. You might even recognize the founder of the foundation.

The Gary Sinise Foundation was created by Gary Sinise, aka Lt. Dan from Forrest Gump among many of his other roles. Gary not only runs his foundation, but also donates his time with his band, The Lt. Dan Band, by touring to bases and performing concerts for those that are in active service as well as for those who purchase tickets. The proceeds go to the foundation to help even more veterans. I could go on about the foundation, but I think that’s good enough. If you feel moved after watching the film or even reading this, please feel free to go here and do so. You can choose to do a monthly donation or give once.

Now onto the review. 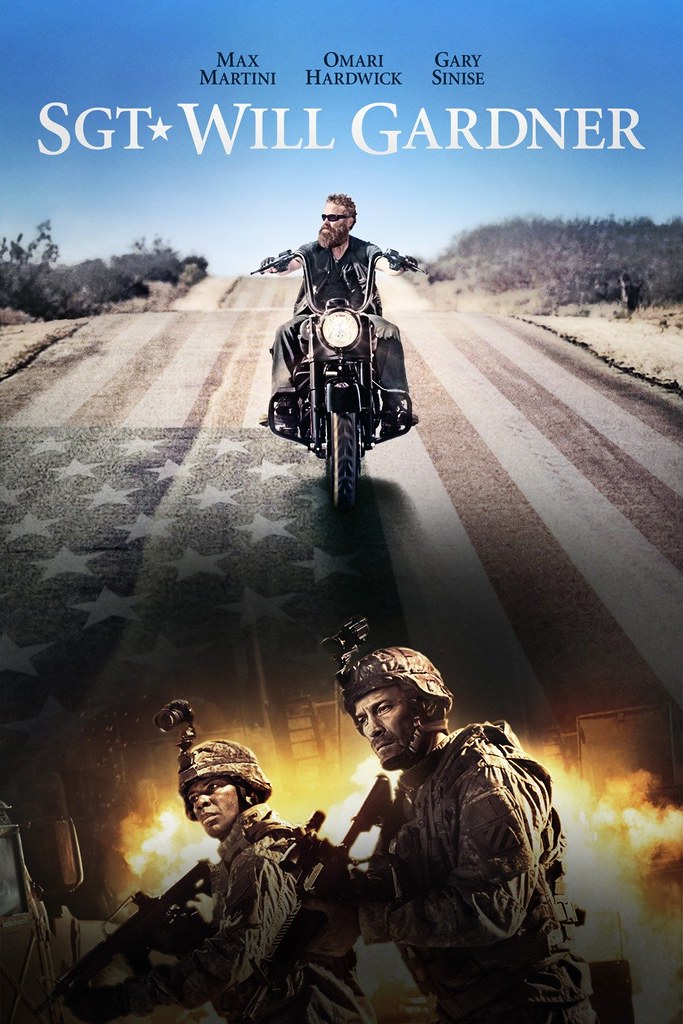 Soldiers returning home often end up fighting a bigger battle than they could have ever imagined. This gripping drama tells the story of Iraq War veteran Will Gardner (Max Martini) who is struggling with the lingering effects of a traumatic brain injury (TBI) from his combat time with his platoon. As part of his struggles with post-traumatic stress disorder (PTSD), haunting memories make his attempt to start his post-war civilian life a challenge. After a series of setbacks, Will decides to set out on a cross-country motorcycle trip with the hope of reuniting with his young son. Along his journey, he reflects on his life with his war buddy, Sam (Omari Hardwick). As the miles pass, Will finds himself making new friends who not only encourage him to confront his past, but also help him focus on a goal of achieving peace and redemption.

Now, when I found out Max was doing another military movie I wasn’t that shocked. Max has a type of character he’s fabulous at and it happens to be military. One of the first things I ever saw him in – without knowing it – was Saving Private Ryan. Don’t believe me? Go watch the movie when they finally find Matt Damon. He’s with them when they disable the tank in the middle of the field before the big fight in the little French (?) town. It’s been a while since I’ve seen the movie so I suck at describing it. He’s had quite a few others on his credits including The Unit as well as Pacific Rim.

So as you read above, Will Gardner suffers from a traumatic brain injury. We’re not given much between the time he returns from Iraq to the present – which infuriates me because I like to know the whole story but whatever, Max. The movie jumps right into the present day with Will squatting in a bathroom at a hotel. Now this diverts from Max’s normal military characters. Either his characters are still in the military or they’re former military doing bad things – kind of like how Sean Bean’s characters end up in jail, dead, or both in the case of Ned Stark.

This movie gave Max the opportunity to delve into a different side of his military characters. The only other time I’ve seen him portray a character like this was in his episode of Criminal Minds (Dorado Falls – Season 7 episode 3) but his character ended up being a sort of serial killer but was suffering from a type of brain injury.

I will readily admit that most military movies hit me in a way that always guarantees that I’m going to cry. With Sgt. Will Gardner nothing changes, except Max made me cry more than once. You got three stars just for that, sir. But Max’s portrayal of this character delved into a place that I’ve never seen him go in acting – unless there is something I haven’t seen in his career that I’ve missed by offhanded chance. There were moments that it was one of Max’s normal military characters. Will was one of the guys and then as soon as you thought Will was getting it together he jumped right off the stable road in front of him.

Max successfully portrayed something that most military centered movies don’t show the audience. There’s so much more to what soldiers experience overseas when they are in the middle of the fight. We as civilians will never understand what they go through. But I fully believe this movie successfully shined a spotlight on something that we don’t discuss in the regular circles.

I give Sgt. Will Gardner five out of five stars and highly recommend you get yourself to the nearest location to you that carries it to pick up your own copy.

3 thoughts on “Sgt. Will Gardner”

May I Help You?